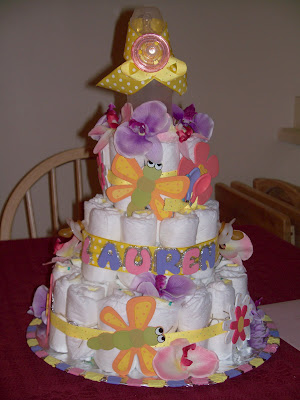 My friend Lindsey is having her baby shower soon for, soon to arrive, Lauren. Instead of just giving her a basic gift I thought I would bring out my crafty skills, and try to make a diaper cake. It turned out great! I now have my "gift" idea for baby showers in the future. Not to mention (hint hint) if anyone here in the Savannah area would like for me to make one for you just let me know ;)

On the down side of the past week Christopher has been fighting a loosing battle with diareah. I called the doctor this morning because it just wasn't getting any better and they told me that he needs to have clood drawn next month to make sure he doesn't have stomach "issues". We had tried to start feeding him rice cereal and it wen't realy well so we started adding in baby foods, that's when the problem started. We cut out the baby food the other day but he still isn't getting any better. The doctor's office told us that this probably started with the rice cereal but took a while to show up, so back to formula ONLY. Hopefully this won't last much longer because his little bottom is so sore. 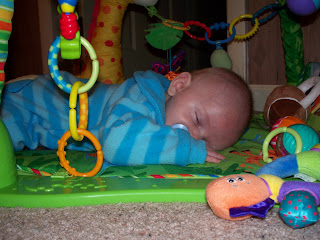 We have also been battling his "lack of tummy-time" issues. Before he would scream when I went to put him on his stomach, now he just falls asleep! So this fight shall continue.

Sorry to hear your little guy has a soar bottom the best thing that I found is original desitine.