My week of terror and loss is FINALLY over. For those of you who didn't know last Saturday my cell phone was stolen on post at the commissary, and Monday night someone attempted to break into our home while Christopher and I were here. The entire group of Southside officers responded to our home, but still no one has been caught.

I did get some good news this week. I officially sign my contract with SOC Monday. This means no more waiting and more money flowing in. I leave you tonight with a video of our little goof, the name of the video says it all........... 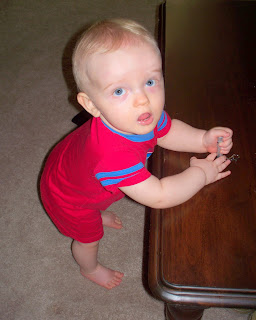 So it's been a little while, or maybe a long while. We have been on a Internet loss here at home. Our neighbor is very nice and lets us hit off his wireless for free, but when the power goes out due to storms (every night) we loose Internet. It has been a few days since the loss of power so I am scrambling to get this updated.

This month has been a learning frenzy for Christopher. He is standing, crawling like a pro, taking steps, and learning more words. I almost wish he weren't growing so fast. He is like a weed, but we are hoping with more movement happening we wont have to buy new clothes for a while. He is still in between 12 and 18 months, and at 10 months old that's saying something. 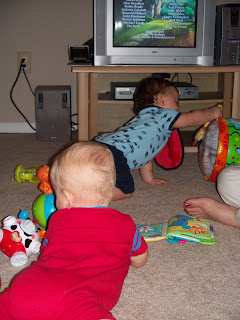 explore more. I almost thought that child was going to have a concussion with all the falling he was doing. I'm so excited to see him learn new things, and find new friends. We had another play date with his buddy Mikael two weeks ago. They play together like you would expect two growing boys to do. Between the hitting each other on the head, throwing toys at the other one, and pushing each other around, they were both beaten and bruised. They had a great time and we can't wait for the next play date.

We met up with my friend Lindsey last week, and Christopher got to spend some quality time with his "girlfriend" Lauren. He wasn't to impresses with her and spent more time watching the waitress. They did however, exchange baby kisses before the end of the night.

On a more depressing note, My phone was stolen from me today. I am not to thrilled at the thought of having no ones phone numbers anymore, or loosing all of my data (pics, music, calender). I can't believe that there are people in this world who believe it is OK to take other peoples things for whatever their reason. Stealing IS a crime, and should this person ever be found they will go to jail. AS ALL THIEF'S SHOULD!!!!

Yesterday was the day for new experiences for Christopher and Jacob. Christopher played in the grass for the first time, and Jacob went to his first baseball game. What a day it became!

Jeff and I went over to my Mom's at about 12 yesterday after Jeff got out of bed. Christopher was already there from me going with her to the commissary for groceries. She was trying to sweep the floor and Christopher decided that he didn't like the noise very well. To keep him from screaming like a crazy person we took him out onto the front porch (he likes to watch the flag and wind chimes). I got the grand idea that since he can crawl now we could take him into the grass, and let him play. He was not to thrilled with the prickly grass on his knees, so he wouldn't put his legs down onto the grass. We ended us setting him down on the grass instead of trying to get him to crawl on it. He didn't move and inch. We did manage to get some very cute pictures though.

Later in evening was when the family picnic and Sand Gnats game kicked off. It wasn't looking very like the game was going to be played, as the weather was terrible. It poured for the first hour that we were there. The picnic ended at 7 and the game started at 7:30 so the wait wasn't to bad. Jacob, not ever going to a baseball game before, was very excited. We had trouble keeping him entertained while waiting for the game to start. We ended up only staying for the first 3 innings because Bubba was getting tired and we still had to get Christopher. We had a good time, and next year Christopher will be big enough to go with us!