Not too much has been happening over the past couple of days. We have had some stormy weather so Christopher and I have been hanging out at home a lot. Jeff and I have discovered that Christopher only likes to day "dad" when he gets mad because it is usually followed by a squeal. He is trying to become more independent. We can't leave him alone on the floor playing anymore due to his recent discovery of continuous rolling. Last night while I was fixing dinner he decided to roll into the coffee table. Luckily there was no bruise but there was enough crying for me to realize that it is time to baby proof.

He loves to splash in the bathtub and has become accustomed to his nighttime routine. It goes a little something like this; book time, bath time, mirror gazing, bottle, food, and then bed. These are some photos I took with my phone lately. The first is of Jeff and Christopher and the second is of Christopher after his bath (mirror gazing!). 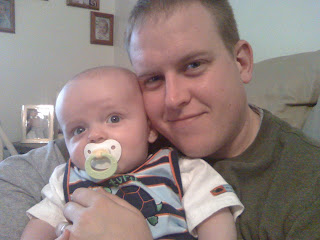 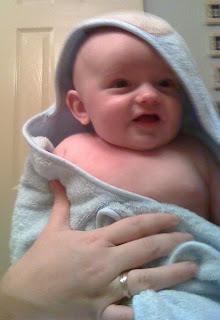 My dear little one makes us proud! 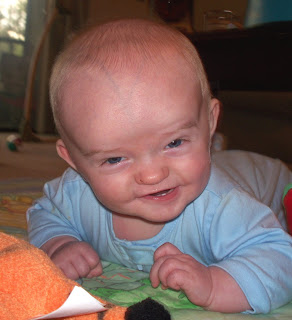 I love Jeff's days off. We get to spend both days doing whatever we please and usually on a whim. The past two days were spent doing anything that poped into our heads. Tuesday we stayed at home with Christopher and cleaned most of the day (not fun for most but when Christopher went down for his naps we got to relax). Yesterday was the day of new tricks and adventures. Christopher started off the day be doing continuious rolling. I can't leave him alone anymore. We decided to take our first family nature hike. Before Jeff and I moved to Savannah we loved nature hike's and would go to new places just to see what trails they had. Christopher loved being out in the woods. He was so excided about being outside that he wouldn't look at the camera for pictures. In one of the pictures (I love it!) he looks like he jumped up into the camera from no where. We saw lots of diffrent plants and even got to see baby crabs waddling arround in the marsh. After the nature hike we decided to feed Christopher his lunch at the boat ramp, and to my suprise he said his first word. Unfortunatlly it was not momma, daddy won out on this one. Below you will see some of our adventure. Enjoy! 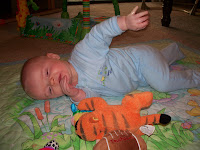 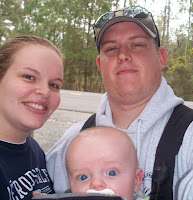 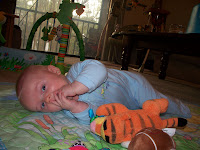 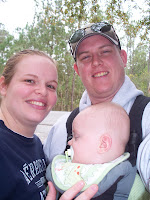 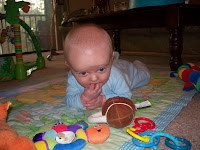 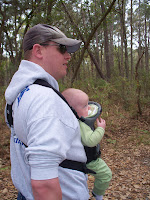 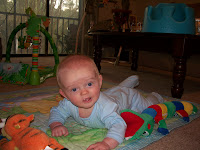 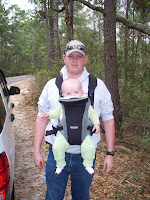 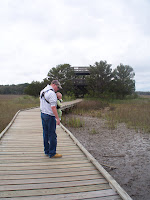 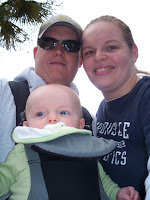 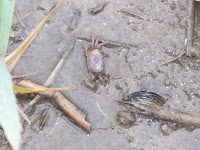 I love watching Christopher play in the bathtub! He still can't sit up well enough to play with all of his toys but he is in love with his rubber duckies. His favorite is the one dressed like a police officer and as much as I try to reverse this, he cares less about the firefighter duck. He is in that stage now where everything is going to him mouth including, in a recent development, his toes. I have tried to get a picture of him sucking his toes (mostly because I am in awe at how he manages this) but that is a picture for another day. 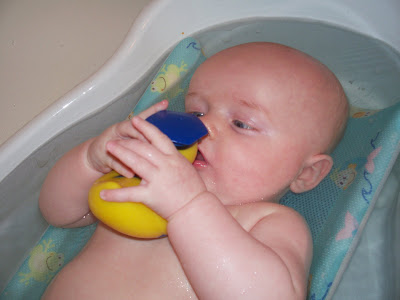 The video is of him playing in his activity center. Lately he has been hitting his right arm against anything in range resulting in a few bruises. I really wish he would stop! I keep wondering if someone is going to ask if I abuse my child. Ignore my rambling in the background I was on the phone with Jeff-Fa-Fa.


He has no concept of pain from Sara Cotter on Vimeo.

I Can Jump! from Sara Cotter on Vimeo. 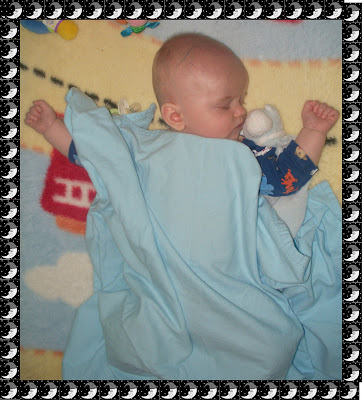 .... how amazing this view is to Jeff and I. With Christopher having 3 sleepless nights in a row this past week we are thrilled to see sleep again. I have had to stop giving him blankets to sleep with at night because he feels the need to cover his face. For some odd reason he would only do this during the night when i can't check on him so we've been using the sleeper sacks a lot lately. Our big update this week is that our chunky monkey is getting even bigger. He by no means fat! He is growing length wise just as fast as weight, if not faster. When I weighed him the other day he was 17.4 pounds and 27.5 inches long. The general size of an average 9 month old.

So this week has been a non-stop roller coaster ride. Niki got here last Wednesday and right away the hustle began. Jeff and I had tickets to see Jeff Dunham that night (if you don't yet know who he is find out... a VERY funny ventriloquist) so Niki went to hang out with one of our friends, Mike. Thursday was a day to relax and spend some time with Niki because I hadn't seen her in FOREVER! We spent most of the day just hanging out at the beach and dishing out the latest "Zanesville" gossip. Most of the weekend included she and I having shopping excursions around town because she is really into thrift shops which are sprawled out throughout Savannah. Monday was a rainy, horrible day so we stayed at the house and watched old movies with Christopher. Yesterday (Happy late St. Patrick's Day by the way) we got all dressed up in our green garb, I'm not a big fan of being pinched, and spent most of the day grilling out and playing with the wee lad. Last night we followed Jeff and Mike downtown, unfortunately they had to work the festivities 'tis the work of a police officer. We had a good time and met a lot of new people. This morning was the long trek back to Jacksonville to get Niki onto her plane.

She tried being a domesticated person this week and discovered that she may not make the best of mommy's or wives just yet. Christopher decided to bring in his 5 month birthday on Monday by not sleeping for three nights straight. I must admit I am very exhausted and I can only hope that he sleeps tonight so I can catch up on sleep.

Jeff and a few others from his area were on 12 hr. shifts for five days straight. They had to deal with a LOT of drunks, druggies, and all around dumb people who come to Savannah for our big St. Patty's day. He had someone smoking cocaine out of a beer can right in front of him (dummy #1), people urinating in public (dummy #2), and a guy that decided that after he was under arrest, for who knows what, he wanted to throw himself around in the back of the patrol car and go to the hospital instead (dummy #3). What he didn't know was that he was still going to jail and just added to his long list of charges. While Niki and I were walking around downtown we happened to see one unlucky, and extremely drunk, fellow stand up and fell back into a park bench which of course cracked his skull open. Luckily there were a group of medics walking by at the time. He was unresponsive for a while and blood was pouring from his head. I know that people like to enjoy St. Patrick's day but there is such a thing as too much. Obviously these people were not informed of this.

Bellow are some pictures from this week that I had on my camera. Niki has more and when she gets home she'll be sending them my way to share. Enjoy! 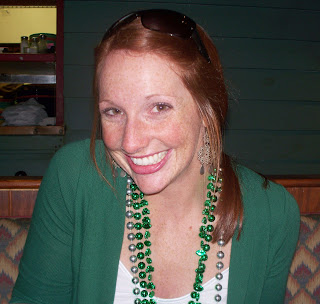 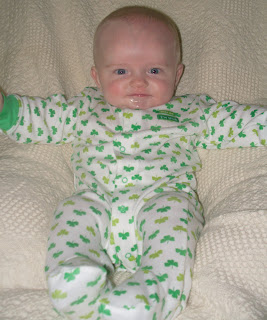 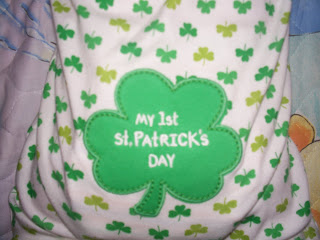 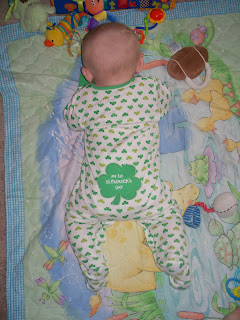 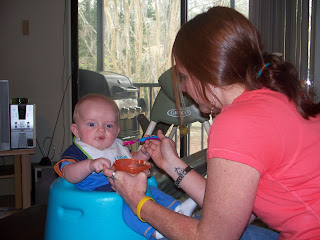 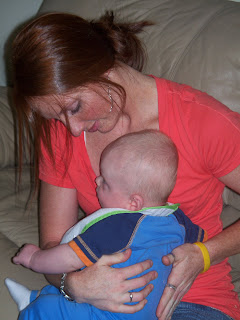 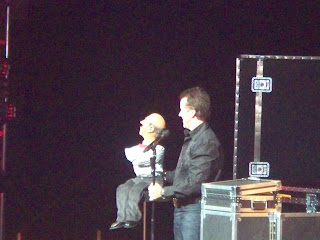 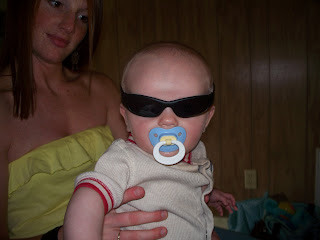 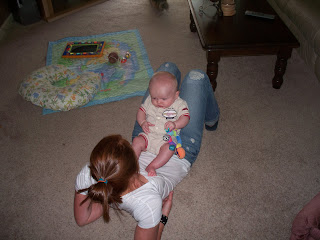 So Aiden turned one the other day and Christopher made a little movie for his cousins big day!


He also tried his first taste of Chicken and Gravy.... Not such a great moment.

EWE!!! NO CHICKEN MOM! from Sara Cotter on Vimeo.

We have been having a lot of fun with Niki and we will be realy sad when she leaves. I'll get thos pictures up here later. Have a good one.

What Is This Stuff You Call Grass?

Christopher has spent the past few hours outside playing in the grass (for the first time!) and enjoying the sunshine and 80+ degree weather. It's so warm outside that he is currently taking his first nap in just a diaper. For those of you wondering, yes he does sweat as bad as Jeff and yes it is just as smelly :( 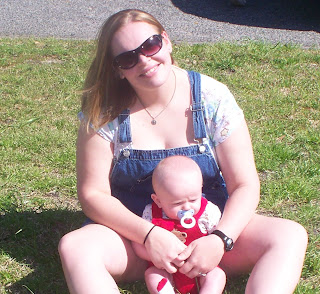 He was playing earler with the ball Mimi got him for Christmas. It rolls on it's own, plays music, and talks to him. Everytime it would get close enough to him he would grab it and hold it next to his head then let it go. I was laughing so hard I guess he thought it was a game because he did this for almost an hour. 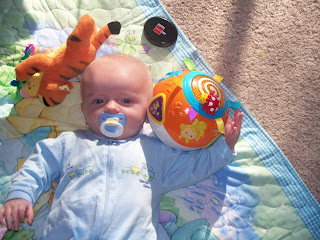 It is an absolutely beautiful day outside today! Mom picked up a kite for bubba since he got the all clear on any illness (except in the head!!!). So after feeding Christopher his lunch we headed outside to try out his new SPIDERMAN kite.


Yesterday I kept saying some funny things to Christopher and one phrase caught his attention and made him crak up!

Whats That? from Sara Cotter on Vimeo.

This Is How We Roll- Jeff

Tuesday was our mandatory Mobile Field Force training day. We are getting ready for St. Patricks day because Savannah has the second largest St. Patricks Day celebration in the U.S. Most of the day was spent going over technique but in the afternoon we drove code all over Savannah. If you watch the video until the end you will see how many units are in front of me. There were at least 6 more behind me.


MFF from Sara Cotter on Vimeo. 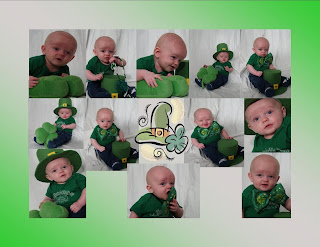 I wish, I wish, I wish every week would be as busy as this one has. Time has flown by and to my amazement there is only six days left until the Jeff Dunham concert and Niki arrives (I'm more excited about Niki to be completely honest!). We have had good and bad days this week. It turns out that bubba is fighting of something terrible, we thought it was the flu the other day but today he can't walk right with in my mind pops up Meningitis Encephalitis. It mimics the flu but is way more deadly causing him to become paralyzed and if not treated, death. So with worry about bubba mounting we soon realized Christopher hasn't really eaten in almost 24 hours. He is refusing food and his bottle, which is way to odd for him! He did manage to eat his bottle at 5 this morning but his breakfast at 10 was the same as yesterday, a fight. We are keeping a close eye on him and hope it doesn't last to much longer.

On the good side, Christopher had his 5 month pictures yesterday and they turned out adorable as always. We didn't get as many poses this month because he whacked his head on his beads during the pictures and ended up with a knot on his forehead. We did get a lot more videos so scroll down through, enjoy!


SwingTime from Sara Cotter on Vimeo.


Dizzy from Sara Cotter on Vimeo.
This last video is how I found Christopher and Jeff this morning!